Beowulf Show dates: July 5 at 7PM, July 6 at 2PM and 7 PM.
At the amphitheater outside WOU’s Rice Auditorium. 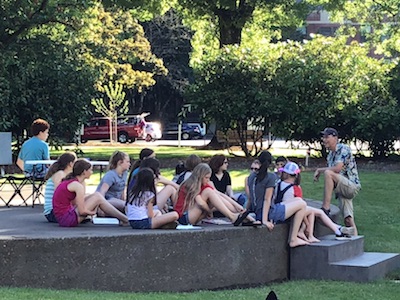 This picture shows why I like writing plays. I like novels and short stories, of course, but plays have the chance to come alive in front of an audience. While my other written characters live in my readers’ minds (and so I occupy some space there, too), the characters of my plays walk and breathe in front of me and other people!

It’s like being a god watching my creation come alive.

Is that too much? Maybe it’s too much. But how else would I describe it?

Beowulf was a difficult script to adapt, so it’s especially gratifying to find the show working so well. The translations I worked from were decidedly not written for children—to the point where I don’t expect most of these kids to ever read Beowulf in the Seamus Heaney or Tolkien. My challenge was to make the material interesting to kids.

The story wasn’t the problem. Grendel? His Witch Mama? A Dragon? Swords and battles? These kids LOVE that sort of thing. No, it was the bits in between the battles that I needed to “jazz up”: the gift-giving, the dissing, the plotting.

And the characters all have lovely backstories in the original poem, but they needed to be adjusted so the kids would “get” them (and also because Beowulf is 95% male, and our casts are always at least 50% female).

But how does one appeal to the youngs?

First, I abandoned the poetry. I was able to adjust the Shakespeare’s language when I adapted Midsummer Night’s Dream, but that was in modern-ish English already. I kept the language feeling “old,” less “New Living Translation” and more “King James.” I also edited HEAVILY.

And something I noticed about the speeches gave me another idea. Beowulf is positively soaked in testosterone. One of the speechmaking sessions between Unferth and Beowulf reminded me of a rap battle. The two warriors trash talk each other before the Grendel battle and come out the other side best friends.

That’s how this show ended up with two epic rap battles. The kids love them.

Of course, I’ve never written a rap before, and I’m so. Very. White. But I did it. Well, we did it. We hired a songwriter to help with the raps and the songs (because I haven’t had an original musical thought in my life), and between her, myself, my kids, and other people, and at least a dozen drafts, I think we have some very serviceable raps and songs.

Raps for a kid’s show. About the whitest people ever. Taking place a thousand years ago. Written by a group of white ladies.

What could go wrong?

Show dates: July 5 at 7PM, July 6 at 2PM and 7 PM.
At the amphitheater outside WOU’s Rice Auditorium.